The Sidewalk Gardens That are Making Water Cleaner in New Haven

It looks like a flowerbed with attractive iron post fencing, but these 15- by 5-foot “bioswales” that are popping up on New Haven sidewalks are designed for more than trying to please the eye. These gardens include sidewalk curb cuts that change the flow of polluted stormwater rushing down a city street. Instead of heading downhill into a storm drain, stormwater gets diverted into the garden, and gets captured, filtered, and treated underneath in the soil. Since the final destination of stormwater is New Haven Harbor and the waters leading to Long Island Sound, installing bioswales throughout the City has the potential to make on an important contribution toward improving the health of the Sound.

How the Initiative Began

A GreenSkills job crew constructs a bioswale on Watson Street in New Haven. See more information in the photo gallery above. Starting in 2014, the City of New Haven partnered with the Urban Resources Initiative (URI) and others to install and monitor bioswales as part of two different pilot projects. Staff from URI, a not-for-profit university partnership within Yale’s School of Forestry and Environmental Studies (Yale FES) went door to door and held community workshops in the Edgewood and Newhallville neighborhoods to explain the value of bioswales and seek support for their installation. Homeowners were encouraged to participate in the design process by helping to select plants and flowers. Through community engagement, URI received support to install 15 bioswales. URI used this opportunity to explore different bioswale designs and construction methods, working with crews from EMERGE Connecticut, a social service organization that trains formerly incarcerated individuals, to complete the physical installations. The non-profit group then followed a maintenance plan to ensure that the bioswales functioned as expected since trash and leaves can block the opening of the curb cuts. With help from researchers and students at Yale FES, bioswales were monitored to assess their effectiveness at reducing stormwater flow to the sewer and removing pollutants. These initial projects were made possible through a grant from the Long Island Sound Futures Fund.

The results of the Edgewood and Newhallville pilot projects impressed the City of New Haven, which received a federal grant to install up to 200 bioswales throughout the City’s downtown. The City’s downtown suffers from flooding during high intensity, short-duration rainfall events and bioswales are seen as a first measure to reduce runoff into the City’s storm sewer system. URI and EMERGE teamed up again to submit a bid for the construction of the first 100 bioswales. As the lowest bidder, the non-profit team won and recently completed the installation of this first wave of downtown bioswales. The team was also successful in winning the bid for the remainder of the bioswales to be built in the Downtown and Hill neighborhoods. While specific results depend on location and the severity of a storm, research from all the pilot and downtown projects has found that each bioswale can capture over 70 percent of stormwater from entering storm drains and treat more than 75,000 gallons a year.

What Pollutants are Being Treated?

When stormwater runs off the City’s impervious surfaces, it picks up pollutants such as nutrients, motor oil, pesticides, and bacteria along the way. Excess nutrients, such as nitrogen and phosphorus from fertilizer and pet waste, trigger algal blooms in coastal waters. Animal plankton increase to eat the algae and when the algae and plankton die, bacteria start to break down the new organic material. The bacteria consume the oxygen in the water that fish and other animals need to survive, causing massive die-offs.

A Yale University graduate students enters a manhole on Watson Street to collect data from monitoring equipment installed in the storm sewer. In addition, in some areas of the City, bioswales also help prevent another serious threat to the health of the Harbor and Long Island Sound: untreated sewage. In certain neighborhoods, such as Edgewood, there is only one underground pipe to convey the City’s stormwater and sanitary sewage. This is known as a Combined Sewer System.  In dry weather, the pipes drain only sewage to the City’s Water Pollution Control Plant (WPCP) for treatment and discharge into the Harbor. But during a rain event, the volume of stormwater and sewage may exceed the plant’s treatment capacity. In that case, the untreated stormwater and sewage mix will be discharged directly into the Harbor untreated, which is referred to as a Combined Sewer Overflow or CSO. Combined Sewer Systems are common in large, older cities such as New Haven where infrastructure was installed over a hundred years ago (before treatment plants and the Clean Water Act). In New Haven, approximately 43 million gallons of untreated sewage and stormwater are discharged into the Harbor in a typical year. Constructing bioswales within combined sewer drainage areas helps to reduce this volume.

The Role of the LIS Futures Fund Grant Program

Since 2014, The Long Island Sound Futures Fund has awarded three grants to URI, providing nearly $275,000 in funding to initiate the two pilot projects and to provide ongoing support.  The most recent grant, from 2017, is funding URI’s ongoing partnership with Yale FES to monitor the cumulative impact of multiple bioswales installed in the downtown sewershed. The monitoring is also providing data to assess the impact on reducing stormwater runoff, pollution and Combined Sewer Overflows.

This latest grant also helps URI and the City spread the word about bioswales. URI has held field trainings and informational tours for nonprofit staff and municipal officials in Bridgeport, Hartford, and Providence who want to observe the construction. The grant has also supported the design and installation of informational signage at a number of completed bioswales, serving to further inform people that visit, live and work in New Haven.

Investing in the Social Benefits of Green Infrastructure

While the bioswales provide important ecosystem benefits to urban areas, URI’s partnerships with other organizations have added social benefits.  For example, by working with Common Ground High School students on the maintenance of bioswales, students not only improve the function of the installations but also received an education on the value of green infrastructure in treating stormwater pollution and improving coastal water quality. Additionally, URI also saw the potential to use the project as a job training program. By partnering with EMERGE Connecticut for bioswale installation, URI is providing training and paid jobs to formerly incarcerated residents of the City. EMERGE Connecticut’s mission is to help formerly incarcerated persons make a successful return to their families as responsible members and to their communities as law-abiding, contributing citizens.

The Roy Family Award for Environmental Partnership at Harvard’s John F. Kennedy School of Government is presented every two years to an outstanding public-private partnership project that enhances environmental quality through the use of novel and creative approaches. in 2018, URI received this award along with its partners, the Yale School of Forestry and Environmental Studies, EMERGE Connecticut, the City of New Haven Department of Engineering, the Greater New Haven Water Pollution Control Authority, and Common Ground High School. The partners were praised for conducting “cutting-edge, scalable research for the advancement of green infrastructure and improvement of water quality in urban systems,” community engagement, and the green jobs training program. In a press release announcing the award, Henry Lee, director of the Environment and Natural Resources program at the Kennedy School’s Belfer Center for Science and International Affairs, stated:  “We believe that this partnership demonstrates the impact of a highly-local, adaptive, iterative approach in addressing a critical environmental and municipal capacity challenge – and one that can be replicated in cities and towns all over the world.”

URI has more information on each of the bioswale projects in the initiative, including the data on the monitoring results at its website. 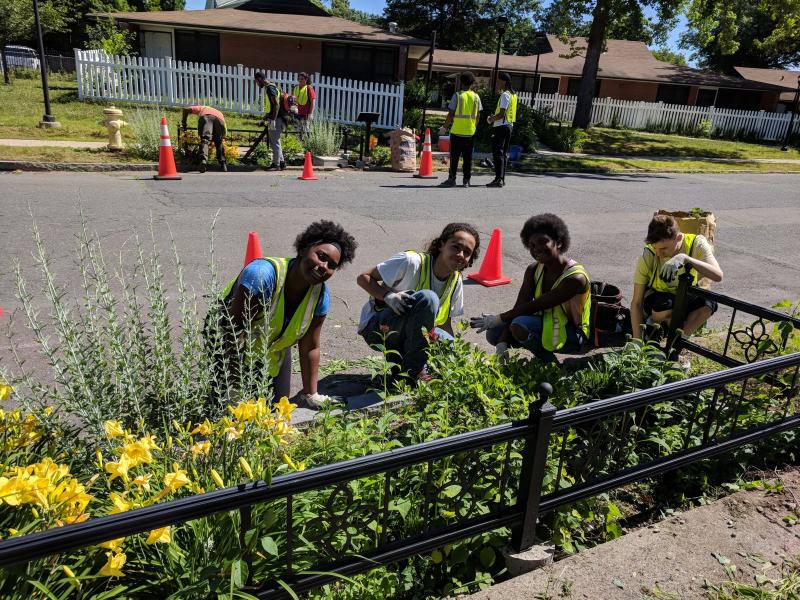 Common Ground students weeding a bioswale in Newhallville. Click the right arrow to see more photos of the Newhallville pilot project. Scroll to the bottom of the page to see photos from the downtown installations.

A GreenSkills job crew constructs a bioswale on Watson Street in New Haven. See more information in the photo gallery above. The plantings and rocks are designed to capture and filter stormwater pollution before entering a storm drain.

A Yale University graduate student enters a manhole on Watson Street to collect data from monitoring equipment installed in the storm sewer. A completed bioswale in Newhallville. A bioswale on Daisy Street in New Haven. Here is an example of a bioswale under construction that has been fully dug out. Each pit is roughly 5′ wide by 15′ long by 5′ deep once completed. Once dug,  students and faculty at the Yale School of Forestry & Environmental Studies test soil infiltration rates and gather other data to aid in research. This is an example of an infiltration test in action. The bottom 2′-2.5′ of each bioswale is filled with coarse gravel, which aids in rapid infiltration. The gravel and gabion, a metal cage which serves as a conduit to the gravel layer below, are then wrapped in a permeable geotextile fabric. This fabric allows water to pass through but prevents dirt and sediment from clogging the pore space below. An example of a fully finished and planted bioswale in bloom on a downtown New Haven street. Each bioswale features a mixture of hardy shrubs and perennials, including both evergreen and deciduous plants. Some examples are several varieties of daylily (Hermocallis), inkberry (Ilex glabra), and iris. A sampling of some of the many interesting artifacts our team has found while digging. Given New Haven’s deep local history, URI and Yale University partnered with a team of archaeologists on the downtown project to help preserve, monitor and catalog items of interest.