In 1998, LISS, through the Habitat Restoration Work Group (now the Habitat and Restoration Stewardship Work Group), established restoration targets to restore 12 priority habitats in order to protect the natural resources of Long Island Sound. Since then, more than 250 projects have been completed, from restoring access for fish to river spawning areas previously blocked by dams to restoring tidal wetlands. A key part of successful restoration is a collaboration between federal, state, and local agencies as well as environmental organizations and local groups. For example, the Long Beach West dune restoration project, led by the US Fish and Wildlife Service, involved more than a dozen partners. Information on that project is available in the LISS media center. Among the most critical habitats are tidal wetlands. The vegetation such as saltmarsh grasses provides food, shelter, and breeding or nursery grounds for many species of wildlife. It also protects the land from flooding and erosion, and filters pollutants contained in stormwater runoff. Today, there are about 21,000 acres of tidal wetlands along the Sound’s shoreline. Federal and state agencies regulate new development on wetlands, but in the past wetlands were filled and dredged for development. About 25 to 35 percent of the Sound’s tidal wetlands were lost before laws protecting them were enacted in the early 1970s. But despite protection and restoration efforts, marsh grasses are still disappearing, with hundreds of acres converting to mudflats over the past 50 years. The reasons for this marsh loss are not yet understood. Possible contributing factors include sea-level rise flooding the marsh, insufficient sediment supplies to the marsh from upstream sources to balance moderate sea-level rise, erosion of sediments caused by the force of wave action from boat wakes, and the indirect effect of local dredging. New research also suggests that nutrient runoff from sources such as lawn fertilizer and septic tanks might play a role in the deterioration of marshes.

Save the Sound’s Gwen Macdonald explains how redesigning a culvert underneath I-95 in Stamford and Darien, CT has allowed fish to swim up the Noroton River for the first time since the highway was built more than 60 years ago. Riverine Migratory Corridors are rivers and streams that connect Long Island Sound to inland habitats. But since colonial times, fish passing through the Sound have been locked from their upstream habitats due to barriers such as dams and culverts. LISS helps to restore fish passage by
supporting state and local efforts to remove dams, build fishways, and reconstruct impassable or undersized culverts. Once the barriers are removed, migratory fish such as river herring and American eel can return to their historic river habitats. Diadromous species of fish — fish that migrate between rivers and the sea — are a critically important part of the Sound’s food web. Adults are eaten in large numbers by birds of prey such as eagles and osprey, while juveniles are a primary source of food, seasonally, to other small fish and smaller coastal birds. Commercially important species such as salmon, bluefish, and striped bass (some of which are migratory themselves) also depend heavily on smaller migratory species as a food source, such as alewife, blueback herring, and the American eel. 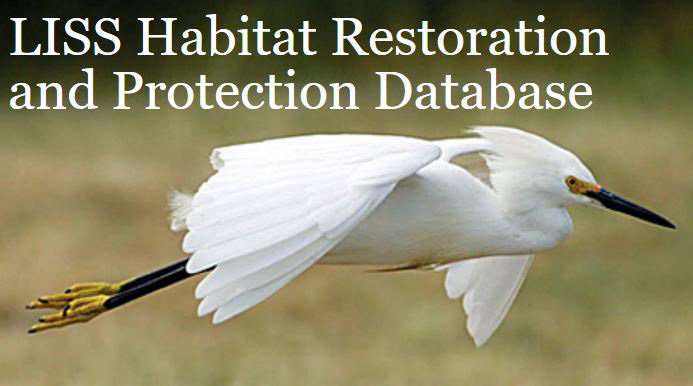 Learn about the projects to restore tidal wetlands at Sunken Meadow Creek State Park in the LISS Media Center. Learn about how a dam removed on the Jeremy River opened 17 miles of new migratory fish habitat in the LISS Media Center.

What are Living Shorelines?