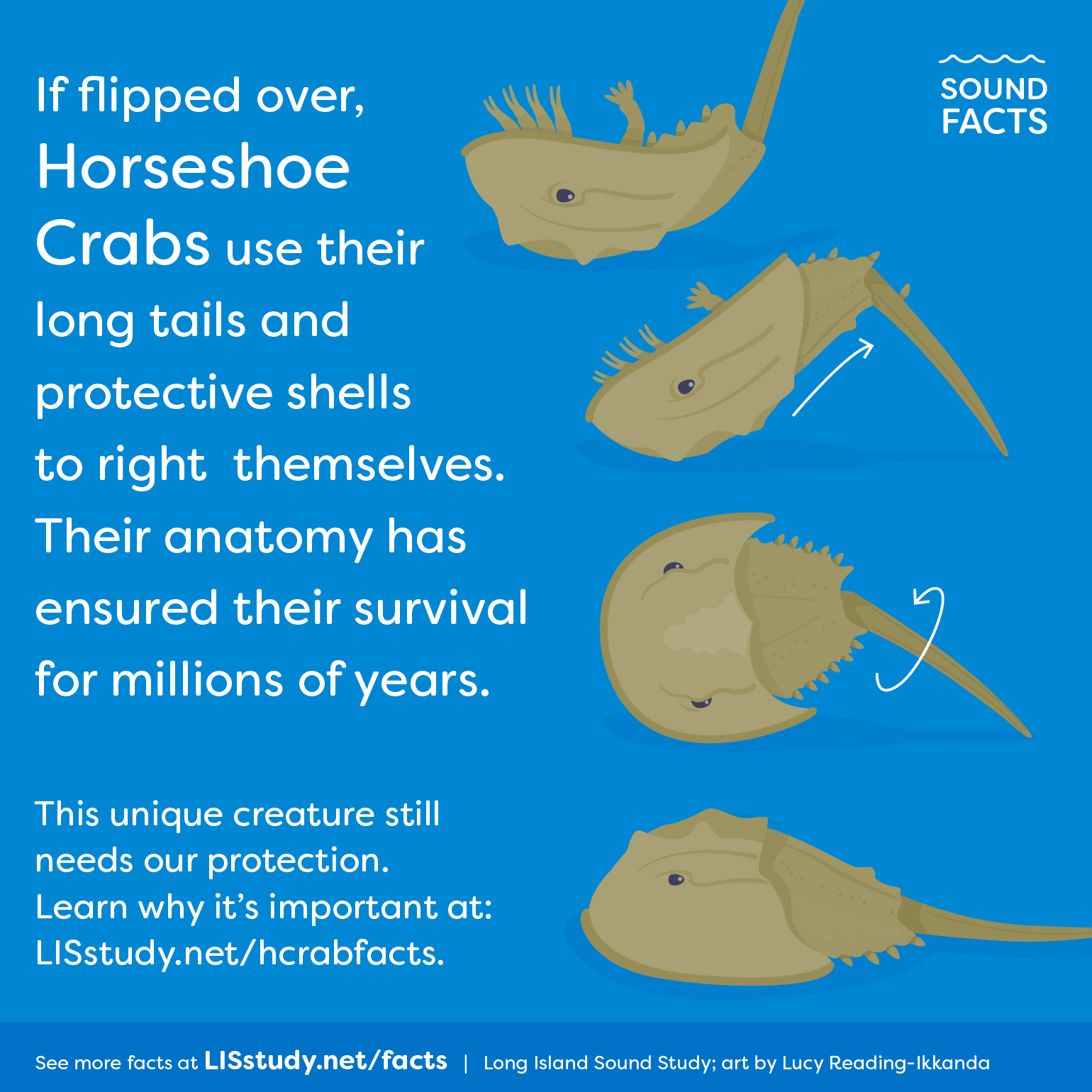 Horseshoe crabs, Limulus polyphemus, are unique and amazing creatures. They thrived on Earth’s shores and waters more than 450 million years ago – before dinosaurs appeared – and they are still around today! They can be found in Long Island Sound and along its shoreline!

In learning about the horseshoe crab, it’s good to first know about two common misconceptions. First, horseshoe crabs are not actually crabs, such as fiddler crabs or blue crabs, which are crustaceans. Rather, they are more closely related to arachnids, such as spiders and scorpions. Secondly, despite their strange brown helmets and long spikey tails that make them look kind of threatening, they are harmless. The telson, or spiked tail, that some people are afraid of is simply used to help the animal right itself when it’s upside down.

Underneath the exoskeleton, which is a shell that resembles a horseshoe, are six paired appendages that are used for eating and locomotion.  Horseshoe crabs don’t have jaws to chew food. Rather, when the five pairs of appendages that act as legs are moving, the bristly areas at the base of each leg called gnathobases tear and shred clams, worms, and other invertebrates. The other pair of appendages, two tiny front pincer claws called chelicera, push the food into their mouths, which is at the center of the legs. Young crabs also molt their outer shells as they grow, so you may find their empty shells during a beach walk. Closer to the horseshoe crab’s tail,or telson, are gills that resemble the pages of a book. These are called book gills and they are also used for propulsion to swim. (Larger photos with labels of the horseshoe crab’s anatomy can be seen in a slide show in the media center of the Long Island Sound Study media center).

Horseshoe Crabs are a Vital Part of the Ecosystem

For most of the year, horseshoe crabs move and feed along the seafloor. Paired female and males come ashore in the spring, mid-May through June in Connecticut and New York, to spawn. They follow the high tides up the beach both day and night but are most abundant during the evening high tides of the new and full moons. The larger females will dig nests 20cm deep (about 8 inches) on the beach close to mean tide, depositing about 10,000 small green eggs that are then fertilized by the male while they are covered with water. The paired female and males then follow the receding tide back out to sea.  These eggs are an important source of food for migratory shorebirds, including red knots, ruddy turnstones, sandpipers, plovers, and dowitchers. This food source is only available when horseshoe crabs are abundant and dig up each other’s nests. Connecticut’s and New York’s horseshoe crab population is too low for this resource to be available to shorebirds. On a beach walk in the spring, you might find many small animals that have hitched a ride on a horseshoe crab’s shell. Horseshoe crabs have been called “walking hotels”—barnacles, bryozoa, slipper shells, sponges, and flatworms are some of the animals that attach themselves to their shells. Photo by Richard Howard.

Blue Blood and Many Eyes: The Horseshoe Crabs Importance to Human Health

These amazing creatures also have ten eyes! The two compound lateral eyes of horseshoe crabs are used to help them find mates. The other ‘eyes’ contain over 1,000 photoreceptors, which have been studied by vision researchers to get a better understanding of human vision. Horseshoe crabs also have another unique feature of its anatomy: their blue blood, which is due to copper-based hemocyanin. Their blood also contains a product called Limulus Amebocyte Lysate (LAL) that is harvested and used to identify the presence of harmful bacterial toxins in vaccines and other medical devices. No synthetic equivalent that has been federally approved for use is available to date. Pharmaceutical labs try not to kill the crabs when blood is extracted for medical use, but unfortunately, not all survive.

Besides medical purposes, horseshoe crabs have another important use for humans: they are harvested by fishermen for bait, and used to capture eel and whelk.

An Ancient Species, but Now Under Threat in Long Island Sound

Horseshoe crabs have survived five major mass extinction events over our earth’s geological history, and the species is known as a ‘living fossil’ because its basic body shape has changed very little over time. But now, with recent population declines in Long Island Sound, their very survival in our region is challenged.

Population monitoring data collected by researchers and citizen scientists, including tagging and spawning counts by Project Limulus based at Sacred Heart University, show that the numbers of horseshoe crabs in Long Island Sound have steadily declined over the past 20 years. Overharvesting, habitat loss, pollution, bycatch in abandoned “ghost nets” and lobster traps, and motorized vehicles on beaches, threaten their continued existence. Dr. Jennifer Mattei, founder of Project Limulus, reports that the number of pairs of horseshoe crabs coming up to lay eggs on CT beaches is declining and the number of females coming up alone, without a mate is increasing.  In Long Island Sound, males are finding it difficult to find females because of their scarcity. Mattei has recommended a moratorium on harvest until both New York and Connecticut can agree on a management plan for the horseshoe crabs of Long Island Sound, including more enforcement against illegal harvesting. To help protect horseshoe crabs and other species that are harvested Mattei also supports the idea of establishing the first Marine Protected Area (MPA) in Long Island Sound, where all the species within the boundary of the MPA would be protected from harvest including horseshoe crabs.  MPAs allow for the conservation and recovery of wildlife populations within and adjacent to them.

Resource managers monitor horseshoe crabs through beach counts and tagging to better understand their patterns of movement and track their abundance.  You can help in the monitoring efforts by reporting a tag to the appropriate agency or by becoming a citizen scientist. Go to the Project Limulus website to learn more.