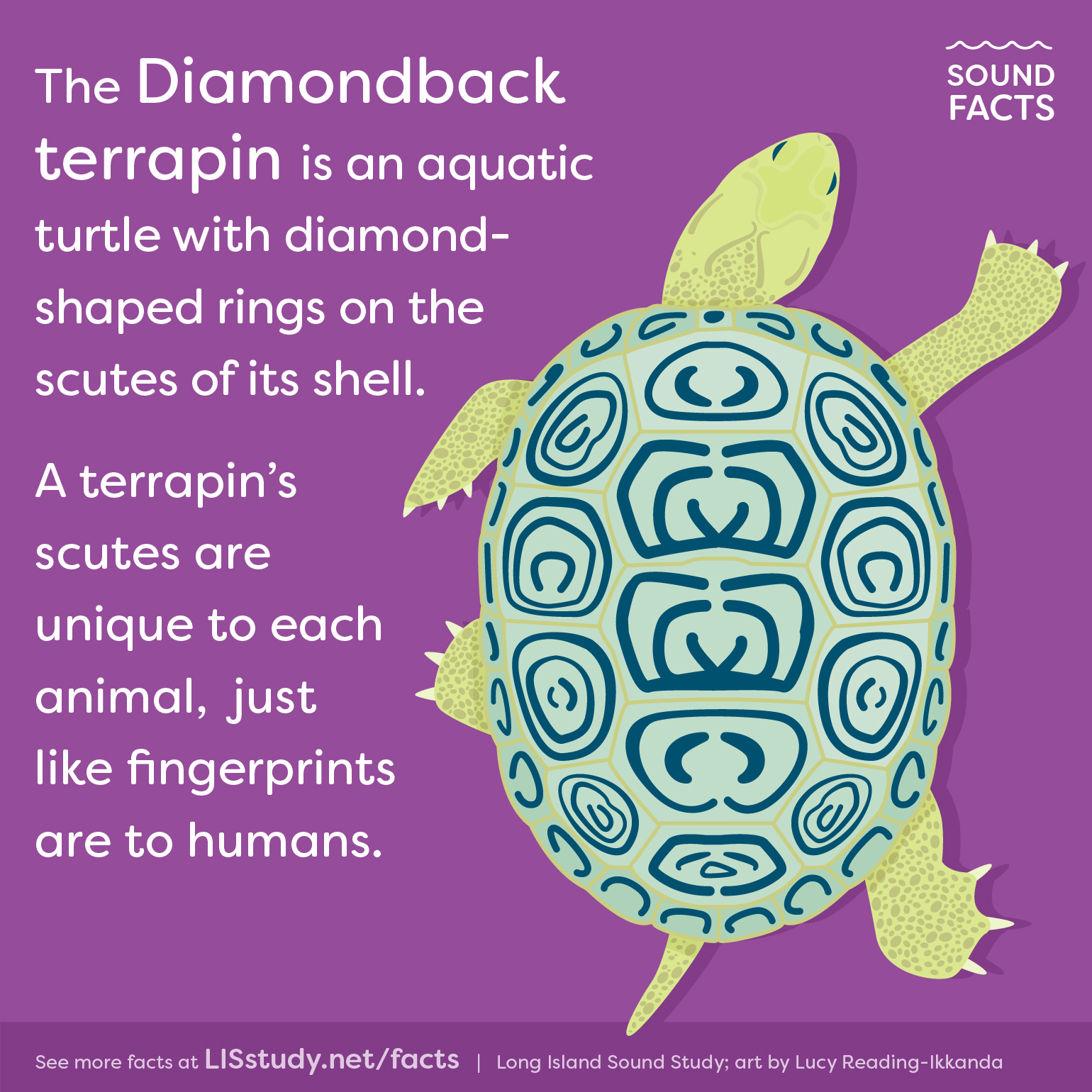 Diamondback terrapins (Malaclemys terrapin) are the only aquatic turtle that lives in brackish waters (a mix of fresh and saltwater). Special glands around its eyes let it flush out excess salt from its body, similarly to sea turtles. While their main habitat is brackish water, they are able to venture out into freshwater and saltwater and can survive in a wide range of salinity levels, a useful adaptation for life in a constantly-changing estuary.

There are seven subspecies of diamondback terrapin; the one that calls Long Island Sound home is the Northern diamondback terrapin which can be found all the way from Cape Cod in Massachusetts down to Cape Hatteras in North Carolina. Other subspecies can be found all along the eastern coast south to Florida and around the Gulf Coast through Texas.

Diamondback terrapins owe their name to the diamond-like rings on the scutes (plates) of their shell. Their scutes are made of keratin (like our fingernails) and each terrapin’s ring pattern is unique to them (like our fingerprints are to us). Females tend to be larger and have shorter tails than males, with a male’s carapace (shell) growing up to 5 1/2 inches long and a female’s up to 9 inches.

Terrapins can live 25 to 40 years in the wild, making them one of the longest-living animals in our region. They live most of their life in water, only leaving it to bask or to nest. They can be spotted poking their heads out of the water in tidal marshes or basking in the sun near mud flats and creek banks.

Diamondback terrapins mate during the early spring months and females come ashore to lay their eggs in sandy areas like beaches and dunes between May and July. They can travel quite a way inland in search for the perfect location to dig their nest, crossing streets in coastal areas (so remember to drive especially carefully around coastal zones during the summer months).

Once a terrapin has found a location for its nest, it will dig a hole around 4 to 8 inches deep using its hind legs, lay its eggs (4-15) and cover the nest with debris and pebbles.

Like in most turtle species, a diamondback terrapin’s sex is determined by the temperature of its nest. Cooler nests tend to have more males while warmer nests produce more females.

Back in the day, these turtles were plentiful and a common item in everyday diet for many people in the East and South Coast of the US. Around the 18th and 19th century, their popularity boomed as terrapin soup became a widespread culinary delicacy, and their numbers plummeted. Fortunately, because sherry was one of the main ingredients in terrapin soup, people mostly stopped eating it during the Prohibition in 1920 – 1933, which helped terrapin populations bounce back. Check out this article from NPR to learn more.

Harvesting terrapins is no longer legal in most of the US, including New York and Connecticut, and many protections are in place to protect them. However, terrapins still face threats.

Highly developed coastlines mean terrapins have less nesting habitat, forcing females to cross dangerous roads in their search. Nests are also predated on by raccoons, foxes, and skunks, and hatchlings are often predated by birds on their way to the water. Diamondback terrapins are also threatened by collisions with boats and by getting trapped in crab cages and drowning.

What You Can Do